Memory Care @ 78rpm is a “music is memory” program designed for elders, playing some of the best music ever recorded, enhancing memories while having fun. 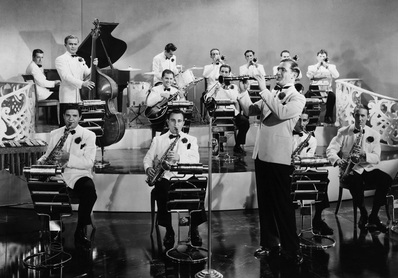 Program Overview:
Benny Goodman, Count Basie, Glenn Miller and scores of other swinging big bands played off the original 78 rpm records on a vintage record player - the model used by high schools' A/V departments at the time. This player was designed for group listening and the fidelity of playback is impressive.  Most of these songs are available on CD or from internet music streaming services, but there is something special listening to the original records played on an original record player.  After all, this was the way the music was originally played and heard in homes, at dances and from jukeboxes.
Many of the records are still in their original 4 or 8 disc albums, with interesting and stylish covers and pictures. During the program, records and albums are passed around for a closer inspection of liner notes, and pictures.
​It’s fun to listen to these songs in a group, flip through the albums, and chat about the memories they elicit.

Photos taken at Sunrise Senior Living in Studio City, California by Bo Bennike
Program Genesis:
I have been fan of swing music since it was introduced to me in the late fifties, when I was twelve years old. My parents played the songs from that era constantly our new hi-fi console - when my older sister wasn’t playing her Elvis records. I soon discovered that all the tunes they played from their long-playing albums had originally been released as singles on 78 rpm records a decade or two before. My dad even had a few of these original records and our hi-fi still had a 78 rpm setting and needle.  I was hooked, and was soon collecting my own 78s, a hobby that continues to this day.
​This Audiotronics model 515VR record player was standard issue for schools in the forties and fifties.
​It has two speakers that can be placed in the front and in the back of the room for easy listening for all.

﻿Photos taken at Sunrise Senior Living in Studio City, California by Bo Bennike
Program Outline:
​Selections are played from an extensive 78rpm record library, loosely around themes, such as bandleaders, singers, regions, or composers. Each song has a brief introduction and chatting between songs is encouraged and welcomed.  The albums and other vintage memorabilia are passed around, including a large collection of original 8x10 movie star photographs from that era. Dancing is always an option.
Program Example:
Click on the audio player below for a sample of the presentation. This one highlights the career and music of Benny Goodman.
Songs in order played:
Please email me for more information about this program.
​Elder Outpost                                                   Memory Care @ 78rpm                                             Walking Sticks for Elders